Please keep our Worthy State Secretary, Anthony Vittorini, and his family in your prayers as he was called home to the Lord on January 2nd. Thank you to all that attended a visitation, rosary service, funeral Mass, burial or luncheon for Tony. Sue and Tony’s family were very touched by the outpouring of love given to their family. Tony was in line to be our next State Deputy in July...a long 8 year journey he was not able to complete. I was much honored to have Tony attend the August 14th meeting with us to celebrate Fr. Joe Hund’s 50 years as a Franciscan. When I asked State Deputy Ken Unterbrink if Tony could attend, Tony was excited to find out that his calendar was open, and he was able to accept the invitation. There is a 45 minute video on Wujek-Calcaterra & Sons, Inc. website if you would like to view a tribute of Tony’s life.

The State Council was in a position that has not been seen in Michigan with the sudden loss of a State Secretary; therefore, the state council met, and according to the Charter Constitution Laws, Section 58, completed its duties.

We have our annual Lenten Fish Fry coming up this month starting on February 16th. It’s a good time to make good on those New Year’s resolutions to be more active in the Knights. There will be a lot of help needed for the Fish Fry’s during Lent. This event will give you a chance to get to know your Brother Knights, church families and have an evening of fun! Please help make our Fish Fry successful. Make an effort to make it out one or more of the six Friday Fish Fry’s. It would be great to see some new blood at this event.

The State Deputy’s Membership Tribute Banquet honoring our State Deputy, Kenneth B. Unterbrink, is Sunday, February 25, 2018, at DeCarlo’s. The cost is $30.00 per person. A table of ten is $300.00. It starts at 4:00pm. We will have purchased a table of ten. If you would like to attend, contact the State office for details.

Established in February, 1900, the Fourth Degree Knights of Columbus promote and exemplify the ideals of Catholicism and Patriotism side by side. Because the virtue associated with the 4th Degree is Patriotism, the degree is often referred to as "The Patriotic Degree.” Further, 4th Degree Knights that choose to be in the Color Corps with its colorful regalia tend to be regarded as the face of the Knights of Columbus and how many people recognize the Knights. (Note that joining the Color Corps after becoming a 4th Degree Knight is optional at the discretion of the individual.) Further, those that become 4th Degree Knights are referred to as "Sir Knights" while their spouses carry the title of "Lady". The Spring 4th Degree Exemplification will be held at DeCarlo's Banquet Center on Saturday, March 3, 2018. Registration for candidates starts at 9 am. Also beginning this year the Candidate Dress Attire has changed:

Please see one of the many 4th degree members in our Council for more information.

The Keep Christ in Christmas Poster Contest entries were judged at the January officers meeting. The winners will be announced at the March Pot Luck Dinner. 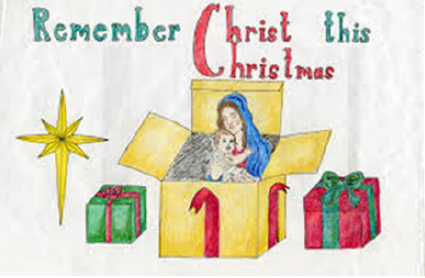 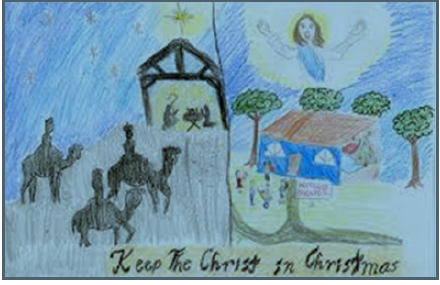 I am going to put out a plug for son Jeremy (who is on Carl’s left). He is the advocate at the new college council at Western Michigan University in Kalamazoo MI. He is in January’s Michigan Columbian, Page 7, pictured with Carl Anderson and 3 other gentlemen at the 2017 College Council Leadership Conference in Connecticut this past September. Nearly 220 college Knights gathered for the annual conference of leadership development, Sept. 29-Oct. 1. Coming from 87 campuses across North America, the attendees discuss membership and recruitment strategies, share ideas for charitable activities, learn best practices in council management and explore what it means to be Catholic gentlemen. They were accompanied by 25 chaplains who serve the spiritual needs of college councils. Attending this year’s conference was David Schuster, College Council Coordinator. 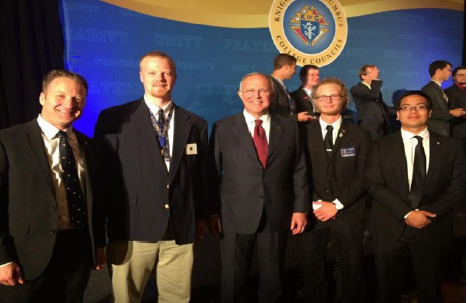